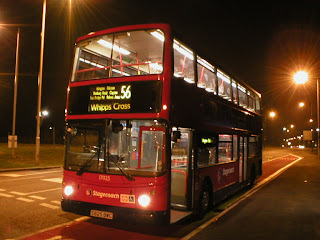 Ohmygod how do you do it!!? I had to go on a BUS today. I had a check-up appointment at the Vet Place and Stormie's Limousine didn't show up so Meowmie said some bad words and then took me to a Waiting Hut on the pavement where the bus comes to collect you from.

I was quite scared, I didn't like being taken to the Hut in my basket, humans kept staring at me. Seems a cat in Central London is a rare sight judging from all the staring and pointing. Then the big red bus came along...what a noise. The bus was full of miserable big humans, screeching medium-sized humans and squeeky tiny humans. The tiny humans seemed most interested in me, I didn't care much for them though so just turned my back on them.

Then we got off the bus about 15 minutes later and I have never been so happy to get to the Vet Place. I had to have some blood tests today to make sure my White Blood Cell count was ok - chemo can make it low and then I can get infections easily and get ill, so Ben Vet checks these things from time to time. Ben vet shaved my neck (again!) and took my blood away, it was very red. I weighed 3.62kgs and Ben Vet seemed satisfied that I was doing OK. Ben Vet said the blood test results would be back in a few days.

Ben Vet then gave Meowmie an update on the vet bill. Ben Vet said that Pet Plan insurance had paid the first claim of £4500, of which the two Meowmies are paying the £900 excess in installments - so really Pet Plan paid £3600. Meowmie went a bit quiet. We got the bus home. I think Stormie's Limousine has been sacked.