I've been better since my last post - only sick a handful of times and those were all acidy-tummy-up sicks and gorged-myself-stupid sicks. No cancer tummy-up-sicks - which is a huge relief seeing as I am considered to be in REMISSION. Ben Vet said to Meowmie that he considered me to be in Clinical Remission - he sounded very sure about it this time, so I am going to state it here in my blog too - he has said it before now, quite some time ago, but he seemed quite definite yesterday when I was there for my Vincristine so I am confident to share the good news.

Can't remember if I explained this before but basically, chemo isn't a 'cure' for animals like me, it just holds the cancer back. Ben Vet said the only way of proving remission for sure would be to operate again....but he isn't willing to do that, he explained to Meowmie that there was little reason to put me through an big operation again because the physical signs tell him what he needs to know. Plus - my tummy hair hasn't grown back yet from the operation in December - I just have very very short downy hair there now...my poor tummy!

Here is a picture of me begging Meowmie to share her chicken dinner with me - you can only see the Green Foods in this picture but I assure you there was DEFINITELY chicken on that plate!!! 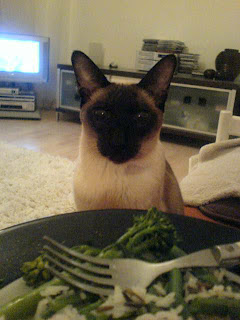