Ise was due a check-up so off we went to see Ben Vet this morning, we had a new chauffeur in a very luxurious vehicle take us there today. The car was a Chrysler Grand Voyager and it was black with tinted windows. My PTU fitted perfectly into the soft leather seat, the arms of which held the PTU nicely in place so I could face forward and see where we were going. I felt like a film star being chauffeured around the mean streets of Islington in North London! My new limousine looks like this...I shall demand it from now on. 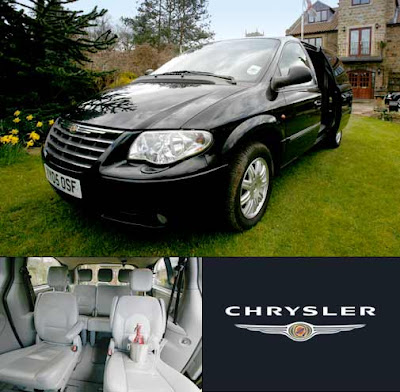 Ben Vet was his lovely self and I gave him some Easter Eggs for him to share with all the staff. Ben Vet said he would keep the best one and share the rest (good plan, I would choose the Creme Egg Easter Egg myself). The good news is that I continue to show signs of being in remission and have put on more weight - I now weigh 4.09kgs which is just over 9lbs!!! What a fattie I am turning in to!

Now, as you know there is a Poo Factor to consider - and yet again I was bunged-up with the stuff. Ben Vet said that because I am always bunged up with poo then the weight gains can be considered as real and not just because of the poo i.e. if you took away the Poo Factor then i would still be showing a gain. In order to try and eliminate the constipation problem I am going to be forced to try canned PUMPKIN PIE filling (I'm a cat! I eat chicken!) and if that doesn't help then they will start giving me prepulsid - quarter of a tablet twice a day.

Prepulsid promotes forward motion through the gut by encouraging the release of chemicals from the gut wall. Prepulsid (or Cisapride) has been withdrawn from use in the UK cos it caused some serious cardio-vascular fatalities in Humans - however, no such reactions have been recorded in animals and a lot vets are sad that this drug will no longer be available as it is used a lot by them. My old housemate Dubbs the Rabbit (RIP) had prepulsid when he had gut problems and it woked a treat for him. Unfortunately though the drug companies won't make it for just animals so now there is a very small and limited stock left in the UK. My Vet bought up a whole stash of the stuff so has some available for a while...hopefully though the canned pumpkin pie filling will work, it would be a shame to have success with a drug that won't exist in this country for much longer!

My check-up was rounded off with a Most Beautiful Siamese Cat in The World (still waiting to explode 2 hours later) and I also noticed Ben Vet giving Meowmie two more little tubes so I could have the Most Beautiful Siamese Cat In The World done to me too when we get home! To take my mind off that disgusting activity I allowed Meowmie to take some photos of me for you to enjoy! Look! I'm fat with a face full of whiskers! You can also clearly see the 'X' on my my nose - the 'X' that made my Meowmie buy me when I was a kitten, she said that "'X' marked the spot" and she had to have me! 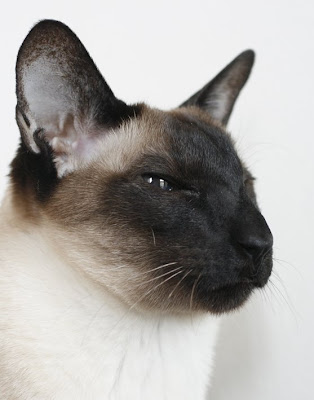 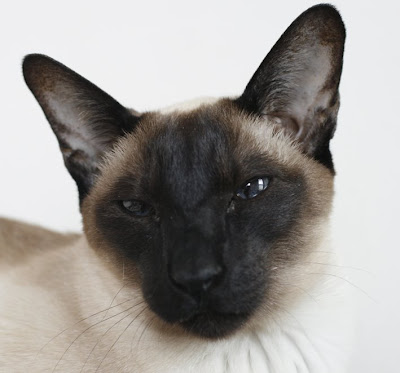 Storm, it's lovely to see you looking so well, you are glossy, full whiskered, bright eyed and most majestic. The weight gain is great news.

Storm, you look great! We are so happy for you.

We're not so sure about the pumpkin, but we hope you like it.

Riley is a big lettuce eater. We wonder if that would help your problem. Just a thought.

Look at your fabulous whiskers! I am glad you are gaining some weight, that's good for you.

Sorry you had to have a Most Beautiful Siamese Cat in the World. That's what happens when you get bunged up.

Storm, all this sounds like good news! You know what? We all love pumpkin! We think it's a bit of a treat! I hope you like it too! I bet it helps you with your bunged up troubles!
Your face shots are lovely - you are very beautiful!

Storm you are looking lovely. It is a meezer's duty to be as big as they can because that means there is more of them for the human to love--and you know they NEED to love lots of meezer, so you MUST continue to gain weight.

Storm you weigh more than me!!! And Kaze! You are looking so wonderful. OK, so with the canned pumpkin (don't get pie filling- just plain pumpkin) here's what makes it tasty- mix it with baby food. Seriously- divine! We also mix in yogurt with active clutures but lots of cats are lactose intollerant so I don't know if you want to mess with that. But pumpkin and baby food is heaven!!!

Great news!!! Well,except for the Most Beautiful Cat thing ;) By all meansget that limo every time.You deserve the best!!!
I see your "X" .You're marked just like Harry Potter only with a different letter ;) You are lookin really good too :)
Purrs Mickey

Hope that pumpkin works for you. Being stopped up is no fun.

Is Prepulsid available outside the UK? If so, you might be able to order it and have it shipped in, if it turns out you need it.

Hang in there, Stormie.

Storm, you are looking very beautiful. I hope the pumpkin works. I've never had it straight, only once Momma's turned it into pumpkin pie, but mmm mmm mmm I could eat that everyday.
Your buddy, Jimmy Joe

Oh Stormie, you look beautiful! And you so deserve that glamorous ride!

Kavan loves the canned pumpkin, and it really helped him when he had, eh. litter box problems. I, personally, couldn't stand the stuff....

Ooh you really do look lovely Miss Storm! :) I hope the pumpkin pie filling works, it's making Mummy drool here she says if it doesn't she'll eat it for you! ;)

WOO HOO!!! Meowm and I are so glad you are gaining weight and staying in remission! We hope the pumpkin works so you don't have to take any pills.

How beautipuss you are. I dunno if I kood eet punkin but you gotta try. Keep up da good wurk!

I am so happy for you,
you look so beautiful and great~!
I can see you are all shining,
even your whiskers are also shiny~~

Keep your good healthy~! Ok~!!!!
I am purring and praying for you!!

Hi Stormie , I is glad that Ben vet was super pleased with you even if you had to have another most beautiful siamese in the world done, and your mum has spares.

Nice ride - is it yours?

Storm, you are so beautiful! :) We are very glad you continue to be in remission. We hope that the canned pumpkin will work for you!

I've used canned pumpkin before and it works well. Good luck with that, or the medicine, I'm sure one of those will do the trick for you.

That is such wonderful news about your weight gain :-D Really great!

canned pumpkin works well. You can have mom mix it with your foods or just put it in a syringe thing and squirt in your mouth.

I am very pleased that you weigh 9 pounds! I weigh 9 too!!

Your ride was very very fancy! I have never been in a car like that! Did you like it? I hate being in the car or in the prison box.

These tow photos of you are absolutely charming and beautiful.
You are a wonderful friend Stormiekins.

This is great news, Storm, except for The Most Beautiful Siamese Cat in the World. I hope the canned pumpkin is something that you will eat and works for you. It is taking you a long time to explode. I hope all goes well.

You are so very beautiful, Storm - I love those pictures of you! Sometimes Mom gives us a little bit of pumpkin - she's heard it's good for hairballs!

Wow that is a nice ride to go to the Vet in!

oh storm you are so incredibly handsome! But then, I would say that as we are face twins!

I am happy you are taken to the vet in a vehicle that befits your status. Although I tend to think a Rolls Royce might serve you better.

Also, I tagged you for the book meme x

Storm you look gorgeous and I have never noticed your X before. You really do deserve to travel around like a movie star. Hope the poo bung thing got sorted for a while. FAZ