Not such a great Christmas present 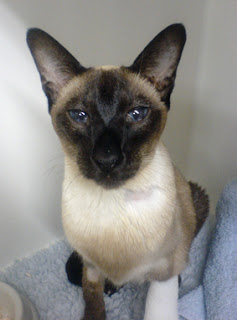 I'se just got back from spending 8 days at the Vet (that's me up there, with my drip in). My humans took me to see him some days ago because I was being sick quite alot, then I stopped eating and then I went all skinny and I felt a bit pissed off in general and wanted to be left alone. My humans thought I was constipated again - you see I had that problem a few months back, it was very annoying to say the least! I squeezed and squeezed and nothing would pop out and I had to have some horrid medicine. Ugh, never again, it was vile!!! Don't ever get constpated if you can help it.

Anyhow, the Vet Man (he is lovely, he has some round windows in front of each eye and is called Ben) said he would need to do a scan to see what was wrong, I could not believe it when he took my tummy hair away with a funny vibrating thing!!! Then I got given some drugs called ketamine which sent me a bit mental for 2 hours (pleeeease don't give me the ketamine again, I am an oriental cat and we don't get on so well with it!), the nurse had to wrap me up and hold me until I calmed down. Once I was chilled out again Ben Vet did a scan. He found a shadow and told my humans and their eyes went wet. Ben Vet told them that he needed to do more tests to find out what the shadow was so my humans left and I stayed for my first night at the Vet Place, it was weird without my brother and humans, there was a strange cat in the box next to me, I think he was a young ginger cat, he kept trying to poke his paw round the corner into my box! I just ignored him obviously, I don't have time for that nonsense.

Next day Ben Vet and Caroline Vet (a tall lady who is nice) did more tests, they got a big needle and took a bit of my body away from where the shadow is in my tummy. They then told my humans that they were 75% sure I had something called a Lymphoma, my humans eyes got very wet again and Ben vet said that to be sure of the correct way to proceed that they had to be 100% sure of what they were dealing with, so he told my humans I needed to have an operation!!!! So I had one the next day, I felt well strange afterwards, all woozy and wobbly. It was confirmed that I did have this Lymphoma thing and that it is a large cell one, which is not so good, apparently it would be better if it was a small cell one, or not one at all really.

Ben Vet said to my humans that I could have something called a chemotherapy, which could make me better and that I could survive for another 6 to 9 months, this is a median survival time, which means in fact I could not be here quite soon, or I could be here for a longer time. No-one knows. Ben Vet sounded sad and my humans were crying and holding me and I felt a bit worried, and the Human that I live with (L) was crying into my fur and making me all wet! Can you believe it!? My lovely fur getting all snotty and wet! The Human that I used to live with (J) stroked my fur all flat again and made me look pretty, which was nice because usually I make J itch and sneeze like crazy but today she didn't care about that.

So, after my operation (my bald tummy now has a big sewn up line down the middle of it, my neck has a shaved patch and my legs have shaved patches too!) I had to stay some more at the Vet Place because my potato-assium levels are all wrong and they need to be normal, Ben Vet said I would be lucky to be home for Christmas - he needed to give me some chemotherapy before I could go home and this relied on those damn potato-assium levels getting normal. "I BETTER be home for Christmas" I thought, I am not letting my brother get all the Turkey!!! My humans came every day to see me, twice a day sometimes and they brought me chicken - at first I wasn't so hungry but when J brings chicken it makes me hungry and I eat and eat and eat. My humans smile when I eat, I don't know why - I don't smile when they eat.

So, whilst at the Vet Place I started my chemotherapy - I am doing something called a Madison Wisconsin protocol (Mad Wis for short), it's going to last for 26 weeks (if I get that far) and I will need to spend some days back at the Vet Place, they are very nice but I dn't really want to live there for a day every month. My first dose of chemo was called a Vincristine, it was OK, didn't get sick or anything. I had a steroid too called a prednisolone, I have to eat these every day for now, I think i heard Ben Vet tell Human L that this will change in the future. I wonder if they will make me all muscley and give me a moustache? They can do that to girls you know. Meowmie L better wear gloves when she gives them to me, I don't think a moustache would suit her.

Now it is Christmas Eve and I am home, I am so glad I am home, I didn't fancy spending Christmas in the box at the Vet Place on my own, well, not quite on my own, that annpying ginger kitten was there too. Meowmie L has put the Fake Green Thing up again and has put some lights in it. I like sitting underneath it but Meowmie L has just put a lot of boxes wrapped in paper underneath it so there is no room for me now. One year Meowmie L got a real green thing but me and my brother liked it too much and made a mess with it so now we only have Fake Green Things at Christmas.

Talking of my brother...I haven't seen him for 8 days, I was looking forward to having him lick my ears clean and letting me curl up against me, I missed him so much. When I got home a few hours ago he came skipping towards me, suddenly stopped short of me and the did THE BIGGEST HISS I have ever seen or heard, right IN MY FACE!!!! I was shocked. Three hours later and he is still hissing at me, punching me with his paw and harrassing me in general; I don't know what I have done wrong but all I want is a cuddle with him. I've punched him back a few times but I'm not in the mmod for this nonsense! Meowmie L is none too pleased - she is trying to reconcile us but this is something that we need to deal with ourselves. For now, I am off to bed, I am so tired from my adventure at the Vet Place and the medicines...I am off to find my favourite cushion...tomorrow is Christmas Day, I hope Meowmie has got me something lovely to get my claws and teeth into :)