Felt like crap when I woke up this morning, had a sick-up in the night too - thank goodness I was scheduled for a Vet Place visit.

Stormie's Limousine came for me at 10.30am precisely - it was my driven by my favourite Strange Man In The Front today, he is from Bangladesh and the first time he saw me a few months ago he said I was very beautiful...he also said "Is that a cat?"...but at least he said "cat" and not "otter" or "monkey"!!! He told Meowmie that since he last saw us he has got a kitten for his children, he showed Meowmie his hands - which had loads of tiny little scratches all over them. Silly human!

When we got to the Vet Place Meowmie J was waiting for us, she wanted to come along and make sure I was doing OK. I was so pleased to see her (despite being in my box) that I did a little "prrrrrmmmmppp" sound, albeit a bit weak. Meowmie J made a big fuss of me and then I saw Nurse Jo and Nurse Jenna who also made a fuss of me - Nurse Jenna told me that I was her favourite patient!!!

Ben Vet came and got us all and took us into his Consulting Box, he examined me all over, having a good feel and squeeze with his hands all over my body. He then weighed me, I am only 2.98kgs now, but not surprising seeing as I haven't eaten for two and half days. He then took my temperature...well...I do HATE that very much but I won't let him put the thermometer in my mouth, so my bum is the only other option. My temperature was normal, my gums looked good..everything was normal basically.

After questioning Meowmie about the past few days Ben Vet has decided that he is going to stop the Leukeran - there is no point in my having it if it makes me feel bad and kills my appetite. So, we just have to hope that the new theories about Leukeran's possible lack of effectiveness as a post Mad Wis maintenance porotocol are true. Ben Vet said with close monitoring and regular check-ups we would be able to identify when I come out of remission and then perhaps try another protocol such as the COP protocol (I don't know what this is so if you do please leave a comment for me).

In order to make me feel better I was given an antiemetic (Stemetil) and then a Vitamin B jab...and then Ben Vet pumped 150ml of fluids into me and made me look like a camel!!!!! He also gave Meowmie some Stemetil injections to take home for me in case I get sicky-up again. By the time I got home my camel-hump had slid down my left shoulder...the first picture was taken before I went to the Vet Place, the second one was after I had come back home...look how lop-sided and fat-shouldered I look in my MUJI bag: 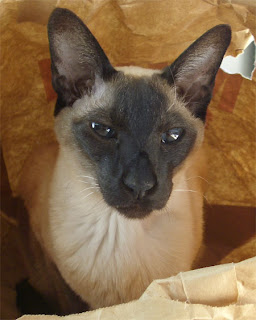 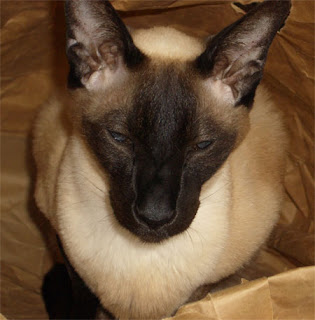 After Meowmie had stopped chuckling at my camel-hump and forcing me to pose for pictures she tried to tempt me with some food...and guess what...I ATE A LITTLE BIT!!! How quick was that? Within 40 minutes of being treated I felt well enough to try some food. I didn't eat so much, but it was a start. Meowmie smiled ALOT and went off to work.

If anyone ever doubts what a rollercoaster of emotion it is for the Meowmies and Daddies of chemo kittkes I would like to present the following exhibit of how things can quickly change with our health. At 10am I was very poorly and refused to eat, the following video was filmed just a couple of hours ago and just 7 hours after my treatment - I was BLOODY STARVING when Meowmie got home from work, the apptite stimulants are obviously working. Meowmie was so pleased - she called Meowmie J on the phone and her eyes were wet - but I think with happiness this time:

YAY for eating!! keep it up, eating will make you stronger and fight better!

Hi Storm - thank you for visiting my blog. I'm so glad your appetite came back at the end of your post! Keep fighting ...

Hi, I just found your blog thru your comment on Dragonhearts blog. It sounds like you have had a very hard last few months, but I am glad that you seem to be doing better. I will continue to check on you and hope you continue to do really well. You and your brother look very similar to two of my cats (I have tonkinese) who have the same coloring as you two.

Tara (not the cat)

Hello Storm, it is nice to meet you! Sorry to hear about your lymphoma. :( I will add you to the list of kitties I purr and pray for. Thank you for sharing your experiences with us.

I have added your link to my blog under "Dragonheart's friends." You are a beautiful Siamese, even after having gone through Chemo! My mom has a soft spot for Meezers, since the one who came before me was a Siamese.

Oh, I forgot to mention, I posted about you on the Cat Blogosphere so hopefully you will have a lot of cats coming by to say hi. :) Stop by the Blogosphere yourself, and you will find a lot of kitties. :) Cats who post to their blogs on a given day leave their link in the "Autolinkies" box, so you know who has new posts, and you can visit them!

Yes, this puts my problems into perspective. Thanks for boasting my courage. It seems I have a long way to go to match yours!

Hi Storm! You are a very beautiful and brave cat. I am glad to meet you. Good for you for eating your yummy chicken. Keep eating!

I added you to my links so I can come back and visit with you all the time!

Hi Storm, I've just read through all of your blog entries and I wanted to tell you what a brave, beautiful, strong cat you are. Your Mummies are brave too. Six years ago, I nursed one of my cats, Leo through a similar chemo protocol for lymphoma, though not nearly so long, it took a terrible toll on poor Leo and us. Leo did well to live for six months after the initial diagnosis. Eventually his liver failed and sadly we had to have him put to sleep at home. I know how emotionally exhausting it is for everyone involved. The ups and downs are terrible, but I'm so pleased that you are finally in official remission. Me and my cats wish you all the best with your recovery and send you and your Mummies lots of love and purrs xx

It is furry good to meetcha! I just saw Dragonheart's posting about you on the Cat Blogosphere. YOU are a furry FURRY brave kitty and you have a great Mommie who is taking wonderful care of you. We hopes you continue to improve and that your appetite stays good. We will keep you in our purrayers.

Hi Storm!
We came over from the Cat Blogosphere to see how you are doing.
We are very happy to read that you started eating!!
Added you to our Cat Furiends and will be back to visit you often!

Thank you everybuddy for your lovely messages!

I will add you as furrends so I can read about you all and keep up to date with cat happenings :)

Hi Story, we's glad to meet yoo. Dragonheart introdused yoo at the Cat BlogosphereYou're FURRY BRAVE we fink. We's glad you could eat some. Not eating is icky.
Purrrrrrrrs,
Sanjee, Boni Maroni, Mini, Gree and Pepi
Pee Ess. We linked to your bloggy at our blog and at the Cat Blogosphere too!

It is so nice to meet you. We are glad you are hungry again. That medicine sounds yucky! Eating is definitely better than medicine.

Hi Storm!! You are an incredible meezer, that is for sure! You are so brave and strong.

Oh, and I'm going to announce you over at Simply Siamese, its a blog just for us meezers!

Hello Storm. It is nice to meet another meezer. We had a cat (not a meeze) who went through chemo so we can totally understand the ups and downs.

Purrs for you for more ups.

Hi Storm, it is very nice to meet you, Dragonheart sent us over. You and your Mom are very brave and we are so glad you are in remission.
You gobbled up that chicken in a flash on the video, so glad your appetite is back. We will add you to our linkies so we can come see how you are doing. it always helps to have furiends to talk too.
Your FL furiends,

Hi Storm!
We just found you through Dragonheart's link -- welcome to the Cat Blogosphere. You'll never have met such a wonderful realm of blogging kitties & beans!
We're glad to know you're in remission and that you're eating again! Yay!
Your new friends from Purrchance To Dream,
Daphne, Chloe, Spooker, Jazper
and Not The Mama

Hi Stormy ::waves paws:: we saw yoor introdukshun over at da cat blogosphere and just had to come meetcha. Mom read all yoor entries wif some intrist cuz she went thru da same thing wif a cat dat came before almost 7 years ago. She lived for 2 years beyond the original diagnosis. Went thru surjuree and kimo and den kimo again when da bad cancer camed back. We'z just happy to make another frend. Yoor gonna find dat da cats in da blogosphere and der beans (dat human beans) are furry nice, wonderful and caring. Dis is da best place we'z effer been besides our forever home. Mom's gonna add yoo to our purrayers and maybe God can help yoo get cured too!

oh my you beautiful siamese princess! Wow you are exquisite. Congratulations on keeping up such a brave fight, I hope you keep on going and keep pn eating, you are beautiful and the world needs beautiful creatures like you xx