Firstly - I didn't go to the vet today! PHEW! I haven't been sick and I am eating well so Ben Vet told Meowmie not to bother, but I have to go for a check up on Thursday to make sure things are OK in general. So thanks for all the positive thoughts and good wishes, they worked and kept me away from the Vet Place today. Now, on to some very interesting news...

For the past few nights I have seen Meowmie helping herself to some of my rabbit-flavour Whiskas In Gravy pouches - but instead of putting it in my bowl she put it in her bag and then LEFT the house!!! Has she got some more cats somewhere I wondered?...has she taken a liking to cat food and is having it for lunch at the place where she gets the Salmon and Vet Tokens from? Then I heard her on the phone to Meowmie J - she was very excited and explained that she had managed to get within 5 feet of an urban fox by tempting it with MY FOOD!!!! She has been feeding the foxes that live in the streets of Islington with MY food supplies! She said that they are surprisingly tame, there are three of them that she regularly feeds, she thinks they might be a mother and two yonger foxes. Here is an urban fox - some people don't like them though: 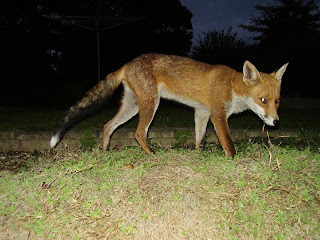 The reason she won't let me eat rabbit (hence it becomes fox food!) is because I used to have a NOMSS friend called Dubbs and he was a rabbit, he lived with us and we used to hang out loads, and Meowmie has always said that it wasn't right for me and Castle to eat rabbit. Anyways, I don't actually like the taste. You can take the duck flavoured food with you for the foxes too Meowmie! It is foul! Haha, no pun intended.

Here is me, Castle and Dubbs chilling out on the sofa together: 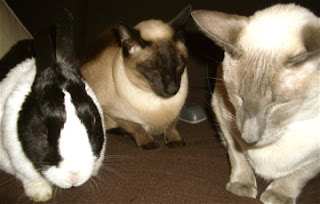 Oh, wow, that is an awesome picture of a fox! But you should tell your Mom that she IS really endangering the fox by feeding him! But she probably knows that and the whole situation has just gotten the better of her... But if she tries to do it again, maybe just bite her to remind her...
Anastasia

she didn't know that no! is it because the fox becomes tame and therefore more easily caught? i'll tell her to stop!

Yes that would be part of the reason not to let the fox eat. Also if he nipped her that could be a bad thing too. And he might decide to beg from humans or try and take food from humans, which is bad and then other humans wouldn't want them around.

I'm so glad that you didn't have to go the vet today.

That is a very scary looking fox! I do not want one of those around me. I would use My Lady as a shield.

Wowww, I am so surprised about seeing fox, what a unexpected animal~!

We are so glad you did not have to go to the vet today. Do those foxes live in town, is that why they are urban
Dubbs was very cute!
Your FL furiends,

Gosh, I think the fox is sort of cute, in a weird sort of way!

The picture of you all chillin' is so cute ...

yes they live in london - they scavenge for food in the bins - there is an abundance of food for them to eat, so meowmie isn't too upset that she can't feed them anymore. urban foxes are less of a pest than country foxes i believe - due to all the food sources available.

I think you are very right not to eat rabbit in honor of Dubbs.

Hahaha....vet tokens. Ah...that's sure what they are in our house!

Wow, that fox is really cool! Meowmy likes them, they have some out by where our horse lives.

Hey! A real live fox!!! Wow! Well storm, I wonder how long it will be before your human tames the fox and it moves indoors. It won't only eat your food you know - it will take over your bed, your friends and everything you hold dear. Be warned. They are cunning those foxes!

I love the picture though, and I love how your human won't let you eat rabbit he he xx