Oh boy, did we have a good New Year! Meowmie J came to see me and Castle and she bought something with her which made me very happy....CHICKEN. I was getting a bit fed up with Turkey so the chicken made a lovely change. Meowmie L mixed it up with some gravy stuff and it was delicious and i made a bit of a mess down my front but Castle licked me clean again.

After we ate our chicken Meowmie J and Meowmie L went out - i think they went to eat some chicken with their friends, that's what humans do you see, they get together and eat their chicken off of one giant plate, which has private little sections for each human to eat their chicken from. Some of the giant plates the humans use can fit 10 people around them! I can't imagine 10 cats around my food bowl, I wouldn't tolerate it!!!

Whilst Meowmie was out there was some big bang noisey-sounds going off in the sky, and there were coloured lights falling from the stars. It was mesmerising, my eyes went all big and I stared but then a big noisy-bang would scare me and send me scuttling back under the sofa. I was braver than Castle, he just hid the whole time.

Yesterday I had another chemo, this was vincristine again, nice and easy to deal with, and only 30 minutes at the Vet Place, not a whole day. Ben Vet said he was happy with my progress, Ise lost a bit of weight, I now weigh 3.57kgs compared to the 3.76 I did weigh. ben Vet reassured Meowmie L that this was the equivalent of a big poo, so not to worry. Phew! 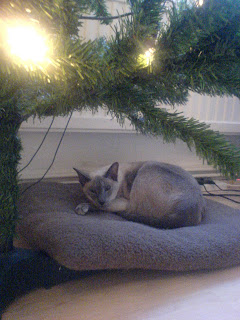