My rule today is...don't go off your food, don't do sick-ups throughout the night and don't be too quiet and aloof underneath designer chairs, otherwise you will get dragged to the Vet Place for a check-up.

As you can gather, I am not feeling any better today, Meowmie spoke to Ben Vet this morning and he wants to see me ASAP. I have an appointment for 4.45pm. Please wish me luck...we are a little worried and understandably Meowmie is scared that the Lymphoma thing is back...

I don't want to be all doom and gloom so here's an old picture of me in a pink neckerchief that Nurse Ann dressed me up in about a year ago, when I was discharged from an overnight stay at the Vet Place: 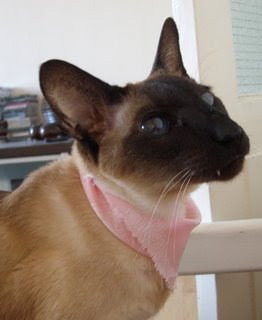 UPDATE: Ise back from seeing Ben Vet; i'se had my temperature taken, Ben Vet had a very thorough feel around me and I had some blood tests. Everything is normal, apart from one thing...my ALT levels (which are liver-related) are higher than they should be, but thankfully not to such a level that makes Ben Vet nervous or worried. He said that he knew Meowmie would google ALT levels as soon as she got home so he explained to her that there are hundreds of reasons why ALT levels can be raised and he did not want her to become alarmed from what she would find on the interweb cos it can be caused by something very simple right through to the worst case scenario i.e. the lymphoma is back and affecting my liver. HOWEVER, Ben Vet said that if this was the case, he would expect me to be a very sick kitty indeed, which currently I am not. Ben Vet also suggested that the raised ALT levels might also just be my natural state...and I might just being having a reaction to the prepulsid tablets - and he agreed that Meowmie should stop giving me the prepulsid tablet in case that was the cause.

Ben Vet gave me a Zantac injection a B12 injection and some Sub-Q flooids. Ben Vet is going to closely monitor my ALT levels now, and if I don't perk up within 24 hours to call him for another appointment, he will also carry out further blood tests too. He also said that if I am being a fussy eater that Meowmie can try and tempt me with anything she liked....bye bye exclusion diet! YAY!

Thank you ALL for your purrs and kind thoughts, it means so much. Paws crossed that my ALT levals are indicating nothing serious! xxxx

Purrs to you sweet Storm, I hope that Ben Vet will make you feel better and that it isn't what your Mommy is worried it is.
I'll be thinking of you today and sending up little kitty prayers.

oh Storm, we is furry werried about you - please keep us updated on what Ben Vet says!!

I am sending purrrs and prayers to you Stormiekins.
You will be in my thoughts and purrs all day.
((((bighugs)))
Your furriend forever, Princess

I just learned you are feeling a bit poorly Storm! Meowm, me and Orion will crank up the purrayers for you!

Hope the visit to Ben goes well and you have some good news :)

Storm!!! We're worried about you!!! Please let us know how the VET visit goes right away!!!

Kaze says you should hear her purring across the ocean. (She's the loudest purrer on earth I think)

Purrs Stormy. Purrs. I am purring very hard. In fact, you are probably at your vet right now. Purrs!!!!!

Oh no, Storm! We hope that the lymphoma hasn't returned. We are purring and praying for you!

You sure look snazzy in that pink kerchief!

Oh Storm we are purrring and sending healing vibes for you! Please let us know what Ben Vet has to say.
Your FL furiends,

Oh, Storm, we are purring and purraying for you and your mom.

We is glad it wasn't furry bad news at da vet but we'z gonna be purring and purraying dat da liver stuff was just da medisin and dat it goes back to okay now dat yoo isn't taking it.

STORM - GET BETTER! I DEMAND IT! I am purrig and praying for you with all my heart x

We're glad you have a good report from the vet. We're going to hope your ALT levels aren't anything to worry about.

Perhaps your appetite will return tonight. We sure hope so.

Oh Storm, that stinks you had to go to the VET. I hope it turns out to be a simple little thing that is easy to fix, or goes away all by itself.

Oh I am so happy to come back and hear the uppiedate on your vet visit.
Well, Stormiekins, you must never forget that we are behind you in everything good or bad. Right now, enjoy those flooids. I hope you do not feel like a camel, and I am sure the shots were not pleasant.
Sunday, Blizzie was home and helped mommie with giving me my flooids and boy she messed up mommie. So I ended up getting 200 mls of flooids!! instead of the usual 100/week
OH MEOW, I was pretty ticked off about that, I looked absolutely silly!

purrrrrrrrs an' purrrayers a-plenty for you, storm. it sucks to hafta go to the vet, even when it's nice ben vet. we hopes those mean ol' alt levels don't mean squiddly, and that you perks right up furry soon!!

Hi Storm, so glad Ben Vet gave you a good check up and that the liver stuff is because of the pills, Hope your Mom feeds you some yummy foods!!
Your FL furiends,

Thanks for the update Storm. Ben the vet sounds like he does a very thorough job and cares for you and your Meowmie too. Hope you start feeling better soon xx

We's got our paws crossed for yoo and we's sending lotsa purrs! Hope yoo feels better all way fast.
Purrrrrrrs,
Sanjee and the resta the Hotties

Our paws are crossed!!! We are purring up a storm (hahahahaha, no pun intended!) and we make our staff cross their 'paws' too!!!!
You will be alright!!! You have to be alright and in good shape so you can come to our wedding May 30 and party with us!!!!
There's a goal for you!
Karl

Yea! Eat whatever you want Storm! (I'd go for some beef and tuna and chicken and ice cream and and and...)!
Smooches!

Oh no! Not a trip to the v-e-t!? But at least you can now eat some other foods.

were glad it wasnt too bad Storm.

I hope you feel better real soon. I'll be thinking about you.

Smeagol and Strider, Mystery (Sunnin' at the Bridge) and Gizmo too! said...

Sorry that you are not feeling well. Hope you are back to your old self soon.

Stormie, we hope you are feeling better by now. You don't need any more stabbies from Ben Vet.

Hi Sweet storm, you have yourself a big old feast this weekend, and I hopes you keeps it all down and off the carpet.

My mum would feed Puss (her old cat) yoghurt and sometimes butter, as these were easy for her to lick up in little bits. The vet said that it was helpful as they were high in calories too!! What do you like to eat?

Well Storm that's certainly one way to get off of your exclusion diet! Just don't go tellin' Tigmut'hep what to do or he'll be able to pig all my dinner like he used to! ;)

We're all purring that your fluctuation in ALT levels is down to something minor and that you're feeling loads better by the time you read this! :)

Oh Storm,I am so happy your condition is still good!! WOOT!!!!
It must be wonderful to get to eat what you want too!! I hope that works and you feel better and stay better :) I'll still PURR though,can't hurt ;)
Purrs Mickey

I hope you're feeling better today, Storm. That is not good news about the one blood test, but I hope it means nothing serious.

In the meantime, enjoy the food your Meowmie is giving you now :-) I bet it'll help you to feel better.

We hope you are feeling better soon!

Enjoy being off your exclusion diet!!