Well, my rule today would be, if your sibling constantly sticks his nose in your bum after you have come back from the Vet Place, then you have every right to whap him/her round the head until he/she backs off and leaves you in peace!

I did OK last night and ate well and was relatively perky considering, and I clambered all over Meowmie when she was eating her dinner (she had chicken, what did she expect!)...but at around 10pm I got a bit quiet. I went to bed with Meowmie and Castle but when Meowmie woke up at 6.30am I was sitting in the hallway, peacefully on my own. I didn't want any breakfast either. Meowmie wanted to take another day off work and be with me but I looked at her and told her to go get the Vet Tokens, we will need them!!! So in case I was in pain she gave me an opiate-based pain-killer and then a periactin appetite stimulant to give me a boost. Just before she left I decided that I wanted to sit quietly in my Habitat paper bag, alone. Meowmie came over and gave me some strokes and kisses on the 'X' on my nose and I settled down in my bag for a litle chill-out. Hopefully I will have perked up a little by the time she gets home (aren't I clever...blogging without her help!).

When Meowmie got to work she called Ben Vet and he said that I am probably feeling the effects of yesterday's chemo - he reassured Meowmie that it wouldn't be something drastic like my White Blood Cell (WBC) count falling to a level that would make me ill - it is too soon after the chemo and impossible to happen in such a short time-frame. The anti-nausea I was given yesterday lunchtime should in theory work for 24hrs, so Ben Vet didn't think it is nausea that is making me quiet and puttin me off my food. He also said to Meowmie that he and Caroline Vet had a very good feel around my problem area yesterday and I showed no signs of pain when they were squeezing me and stuff - so this is what makes him think it is possibly the chemo making me feel odd. If I don't eat tonight or tomorow morning though I have to go back and see Ben Vet for some fluids and stuff in the morning.

My adorable friend and face-twin Yao-Lin sent me this picture he made yesterday, with the following message "Here is a little picture for you, just to let you know that I am thinking of you during this dreadful time. You are my face twin - rest assured I am with you all the way, my fighting friend. I promise that you will never be far from my thoughts and I will pray for your speedy recovery as often as felinely possible". I am so honoured that Yao-Lin did this for me - what a bootiful gesture, I hope he doesn't mind me showing his softer side to the Blogosphere...See if you can spot who is who! If we had had kittens together they would have been show-stoppers! 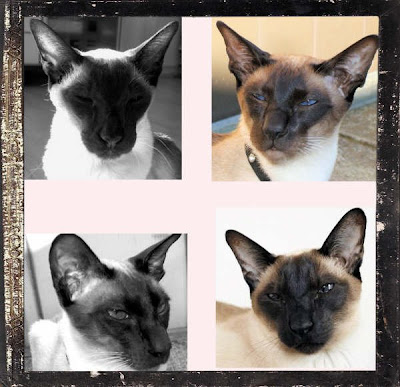 Well, who wouldn't be a little off after a chemo treatment? Just hang in there and eat plenty when you feel up to it....and drink lots of fluids. I understand needing some alone time, but hte love of your Mom will help you recover...so take advantage of it.

We are sorry to hear that you are not well. We're purring for you!

And, yes... do not let anyone smell your booty unless you feel comfortable. Personally, I don't like it at all and usually hiss.

Ah, Storm, it's no wonder you want to be alone today. But we hope you are feeling better when your mom gets home so you can eat a good dinner.

That's neat you have a face twin. You two are marked alike.

Oh dear...so sowwy to hear that Castle isn't being very nice to you after the vet visit! You were wight to whap him!

Anti-nausea just makes you not nauseaus it doesn't necessarily make you feel good--so there are lots of icky feelings that could be normal. I hope you enjoy your habitat sack and feel better by the time you human gets home!

i'm sure you need a nice rest today. i'm glad your first treatment didn't make you sick. you just need some rest and lovin today. puuuuurrrrrrrrrsssssssssss

Castle, you be nice! Storm needs snuggles, not sniffs.

And you will be back in remission within no time!!! That is sooooo sweet of Yao-Lin - we knew all along that he has a soft spot......
We do hope you do not feel all toooo bad with all the chemo and medication and the nasty cancer. You have a wonderful Mom and a great VET - and lots of friends purring for you!!!!
Feel better, sweet Storm, our thoughts are with you!
Karl

Awww Yao-lin is such a softie!! Even the fact that he's nice to me and I look like Baby Mao. I'm sorry you're a bit off but I'm sure its to be expected right now.

Get lots of good rest, Stormie! I love the "face-twin" graphic that Yao-Lin sent you. You two really do look a lot alike!

Storm I agree with your meezer rule 100%. Whilst I am not altogether pleased by your exposing my softer side to the blogosphere, I forgive you because you are my face twin and I love you!

Stay safe and warm in your habitat bag dear Stormie, like I said, you are never far from my thoughts. x

Y'know Storm, you and Yao Lin really do look like twins, that's a lovely graphic he made for you. I'm not surprised you feel a bit off colour, those chemo drugs are powerful medicine. The Habitat bag looks like the perfect place to rest. Sending you, your Meowmie and Castle lots of love xx :)

Storm, what a great rule. I will update the Meezer Rule wednesday post when mommy gets home (apparently, I am not as clever as you, I can only comment and not update while mommy is at werk. hee hee)

we all hopes that you is feeling better this evening.

It's understandable you want some alone time.You need your rest to
get better."Wow" it's amazing how much you and Yao-Lin look alike.
Me and mom want you to know your in
our thoughts and prayers.Your a very strong brave kitty and we love you....Hugs and Purrs Ariel and Her Mom

You and Yao-lin do look a lot alike, Storm. I love the graphic he did for you. Rest up lots in your Habitat bag and feel better when your Meowmie gets home. I hope you are up to having a nice dinner, so you don't have to go back to the vet for an IV. You will lick this thing and get back into remission.

KC and the Giggleman Kitties said...

KC said...
O, Storm, wish you was feeling better. You haf a really cool bag to sleep in.
We's still purring for you.
Love & Purrs, KC

Oh wowie, you and Yao-lin do look so much alike! And hehe, you would make an adorabble and Royal and Gloryus Meezer Kouple!

We Ballicai are purrin with all our strength fur you. We're gonna check in on you efurry day and give you lots of lovies and huggies, and we're gonna lend you our strength and our love to fight this thing!

We love you, Stormie!

Kittyhugs and our strongest healing purrs -- MaoMao and Dorydoo and Brainball.

Storm, dear, you are an inspiration -- hang in there, precious girl. I'm sorry to hear you're feeling off from the meds, but it sounds like you're off to a good start in your fight. You are in my heart, and I'm sending you my love.

Snuggles and my strongest healing purrs!

Hey Storm, we are purrring for you!! We hope the treatment helps you feel better! We think of you daily! (((((hugs)))))
Your FL furiends,

I hope you do 'perk up' later :)
I wish you would feel better and get better too. Whatever happens I'll be there for you :)
You always have my purrs!!!!!!!

U not Storm the Furry Fighter for nothing, ya know? U have strong spirit and we are tinking of you and send kitty power.
Gentle hugs and mighty purrs to you. : )

You are very very strong~!
I may not as so strong as you are, You are really amazing to me!!!
We are all here, praying very sincere for you, you will be ok!!

My dearest Stormie! I am so very sorry to hear about your turn this time. I pray for the Lord to lift you up and hold you close and give you renewed health with his great mercy. I know how hard this is on you and your mommy. Please know how much I care and want to hold you close too. I know you will soldier on through this with your head held high. You inspire us all to be better kitties...I love you!
Miss Peach