Meowmie did not go to work today cos she was still feeling ill from Snowy Vienna, she explained that she needed a day of TOTAL rest in order to have the strength to go to work tomorow - she HAS to go tomorrow cos she has an important meeting in the morning.

After Meowmie had her breakfast she then proceeded to do a load of moving things around!!! She removed her old pooter from her bedroom and put it in the recycling bay downstairs, then she moved the mini-stereo from the sitting room and set it up in the bedroom and then she unpacked her new Harmon Kardon Soundstick speakers and set them up in the sitting room. Her main music system now is basically her MacBook hooked up to the new HK speakers - which sound awesome!!! They really do give a clear sound with a superb mid-range and bass..they also light up blue when powered up...hey, I happen to know my stuff when it comes to music....don't be so surpirsed at this little kitty! They do look weird though.... 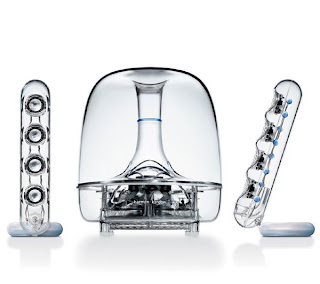 After Meowmie had exchuasted herself and collapsed onto the sofa she noticed me acting weird again...I was straining to go to the loo, not just in my tray but on my various beds, the rug and the sofa, but nothing was coming out...So off we went to see Ben Vet who luckily had a slot free at short notice. By the time I got there I was straining bloody urine drops - Ben had a feel around and more blood came out of me along with my urine. Ben said he suspects it is just a common but severe Cystitis again, possibly bought on by stress (this what happens when cat-sitters come into my home!!!) or my weakened immune system (hmm, can't blame the cat-sitter ofr that one). However he said that we need to keep it in mind that one of the medicines I was on during my chemo - cyclophosphamide - can cause Haemorrhagic Cystitis, which is cystitis but with an added risk of haemorraging.

Ben Vet reassured Meowmie that I was OK for now and he gave me shot of morphine-like drugs to relieve any pain cos I can't have anti-inflammatories cos I take a steroid drug. He then gave me a shot of anti-biotics which will last for two weeks, this should fight any infection I have. I've also got some Cystaid capsules to take twice a day. Meowmie just gave me one but I hated it and threw it up again. YUK!

I am chilling with Castle now and the morphine drugs have definitely eased the pain down there. Ben Vet said if the treatments administered today don't work then he needs to investigate further. Today marks 11 months post-diagnosis of my lymphoma, and I know everyday is a bonus especially as I have now exceeded the 6-9 month 'average' survival time. I am the Furry Fighter and will fight this as best as I can! 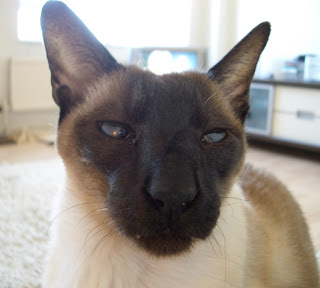 PS - check out my whiskers by bigifying the picture! They are growing nicely now :)

Storm you are such a wonderful fighter! You are such an inspiration to us all. I do hope this pain subsides soon. Your whiskers are incredible! Long and luxurious!

Hang in there, Storm. Our brother Vincent fought the cancer for 3 1/2 years and he was a complete marshmallow. You are the furry fighter, so cystitis is no match for you. We will send you some purrs because we hope you feel better soon.

Look at your luxurious whiskies! I'm glad they're growing back for you.
I hope your bladder starts to feel better soon. We're sending lots of healing thoughts and purrs and purrayers your way.

We clicked on, and biggified your gorgeous face and had a look at those
"wikkerz" they are beautiful. We will print out that picture and put it in our room!

Stormie. Get all better. Please. we love you more than treats <3

Sorry about this latest problem Storm. I hope you are feeling better.(I know you are a good fighter)
Yer Mom's speaker set up looks super cool!!(Mom is jealous'heehee)
Whiskers & eyebrows!!! That has GOT to be a sign your body is fighting back,right?!!!
Purrs

I have seen those new speakers in the store, that is so neat~!! I am so admiring you have one in your house~! That is great~!!!!

And, I think your whiskers is good~!!! It also means your health condition is very good. I am very happy for you.

You look beautiful, Storm. I'm sorry you got an infection, and hope the drugs keep on helping you feel painfree.

I hope the medicine works for you. We cherish every day you are with us.

Your whiskers look so good we can see them without biggifying the photo! YEAH.

I hope you feel better and that this is merely a little flare up of a run of the mill cystitis (bad enough). I would hate to think it was something else. Be well.

Purrs to you and yours

I really hope that your momma feels better for her meeting tomorrow.

P.S. I had no idea how big your nose was until this picture. You are a huge cat!

We are sorry your Mommy is not feeling good and that you aren't either. We purr and purray for you both. Your whiskers are looking wonderful!
Your FL furiends,

I hope your Mum feels all right for her meeting. I hope you get to feeling better right away, too. Your whiskers are awesome!

I like all the Doctors on Doctor Who, but I think Jon Pertwee is my favorite.

Bless your heart. It's always something, isn't it? You must be a "sensitive" kitty like Obi. Stress brings on cystitis in him too. We're still sending lots of purrs, headbutts and nose kisses to you. Hang in there dude!

You are a fighter never stop.Me and mom will be praying that everything gets better...Hugs and Purrs Ariel

Storm, those are some mighty beautiful whiskers you are growing in. I am sorry you are having potty problems, it sounds very hurty. Stay strong, you are such a brave furry fighter!

Those are some nice whiskers! I hope you are not in too much pain anymore, keep fighting! Oh and thank you for the meme, it was a pleasure to do.

we hope you are feeling better

Awwww Storm, we hope that you feel better! Mommy squealed at your handsomeness! What a wonderful face you have!

Dear Pal Storm, stress is not good hope you're feeling a big better after the cystitis. Keep fighting. FAZ

Hi Stormie.
checking on you again today <3
Those speakers your mom has are really cool.
We hope you are feeling much much much better today. We think you are a cutie pie :-)

You are such a regal lookin' gal, Storm! I hope you and your momma are feelin' better by now. My momma was super busy and tired after her travelin', too, and today she's gonna cook up a big feast for Thanksgiving! It's my favorite holiday!!!
Your buddy, Jimmy Joe