As some of you know, Cheysuli recently transpodded herself to London Town to keep a check on her Beans...well, unbeknown to her Beans, Chey also had some Meezer fun whilst she was here! Castle and I met up with Chey in Covent Gardenn by the Tube, just after she had been to the theatre to see The Mousetrap... 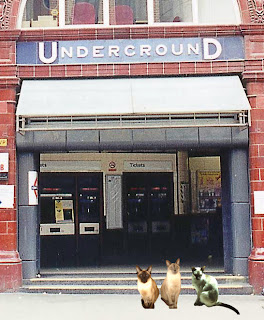 We then took Chey on a little tour of the area on foot, we checked out the old Fruit and Veg market, but this doesn't hold much interest for a Meezer; we then showed her The Royal Opera House but we think Human voices sound ugly, not like our beautiful Meezer vocals! We then decided to stop off for lunch at our favourite restaurant: 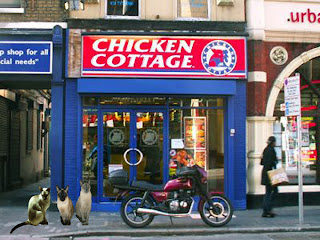 We then had a surprise waiting for Chey in Trafalgar Square - I'm not talking pigeons here either - we transpodded A LOAD of MEEZERS to London for a very special trip! 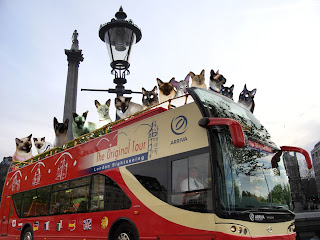 Yay! The Meezer Bus! We then took everyone on a Magical Meezer Tour of London; we stopped by the London Aquarium to see the fishies; we then went to the British Museum to see our ancestors; next stop was Harrods Food Hall to see the famous fish counter display; then we headed up to Hampstead Heath to see rabbits and squirrels running around. Our next stop was very special indeed...Buckingham Palace!!! Yao-Lin had talked us into STORMING the palace and claiming our regal status back! But when we got there we were prevented from snatching the throne back by Beans in Red with guns! Plus some of us had started to nap, which meant a full-on Meezer assault wasn't going to happen...plus we seem to have lost three Meezers cos there was 13 on the bus but only 10 at the Palace! (Storm, blame my stoopid forgetful brain! - from Meowmie L the editor) 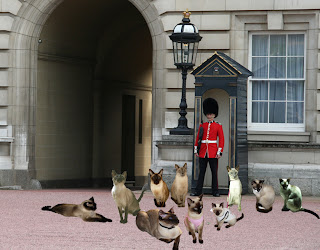 At the end of the afternoon we all parted ways, Chey headed off to spy some more on her Beans and everyone else got in their transpodders for the very brief journey home. But, be warned, we cased-out Buckingham Palace for future Meezer assaults - world domination WILL be our destiny!

Oh my goodness...look at that! A whole group of Meezers out on the town.

Brilliant Storm just Brilliant. You know I am thinking of giving up the presidential run and just having an organized meezer world takeover...

Oh Storm that was SO SO much fun!! Thanks for including me on the meezer tour, it was nice to see all of the sights. What a fun trip it was, I hope to come back soon!

We biggified the photos and they are marvelous. What fun all of you had. Now we are sad that we are not meezers, this looked like a meezing good time.
The busride had to be the most exciting. Mommie went on one of those.

Wow, what a fun tour of London! :) It sounds like all you Meezers had a fabulous time! Almost makes me wish a was a Meezer.

um, i wented back to the aquarium to do some fishing. sammy ran after me so that i would not get lost. sorry. mommy will pay for any fishies i may haf caught. - Miles

Wow, you all had a great time! That looks like loads of Meezer-y fun.

MAAAAHAHAHAHAHAHAH!! That is the COOLEST thing I have seen in forever!!! Excellent! The meezer bus! Oh, good times to be had by all us meezers. Fabulous post! My human is laughing out loud at how clever and cute this is! x

This is fantastic, you should have come and visited me in Wimbledon too. It looks like you had an absolute ball. FAZ

It looks like all you Meezers had a fabulous time. I'm glad you could all get together for a Meezer London tour.

I had such a great time (even if Kavan was along). I almost lost him when he was chasing the squirrels. Too bad I found him...
Tara

I, Napoleon, has been workings on the world dominations alot lately...I thinks we has to try the cute angle. If that fails, I suggest claws!!!

I get jealous every time I read your blog! Someone offered me a ticket to Vancouver last week, but I felt like asking if they could change it to a ticket to London!

What an adventure - Ninna's a little sorry she didn't get to go along! (She would have been hiding anyway.)

Ohhhh, it was just wunnerful, Stormie! I had such a great and superduper time, thankies so furry much! I hadn't nefur seen London before, and I think Yao-lin had a supergreat idea -- Totul Wurld Domminashun is a furry great Meezerly Goal!

Okaysss we forgives your momma for forgettins us on the bus. We thinks thats supers funny about the blue towel. hehehe

Oh man, that's an awesome tour, Storm! My momma said she's been to London and she wishes she had seen the Meezer tour there. Did you get some fish 'n' chips?
Your buddy, Jimmy Joe

I am asking my meomy if you would include my blog on your site. My blog is:
http://newspaws.blogspot.com/

I love your web site- you make us meezers look great and my paws are crossed for your recovery!! My meomy is a pediatric oncologist and I spend time as a pet therapist with many children with cancer so sort of know what you are going through. (And my meomy - even though she's a doctor who fights cancer has had it twice herself- how's that for irony!

Please take care of yourself!!

Thanks. From another meezer,

ps- do you have an email address? My meomy looked but could not find one - but she worked all weekend and was tired so I'll give her one excuse. :-)

Dear Storm,
I enjoy your tourist guide very very much, each detail and movement.
That's great~! I really wish I could been there somedays~!

did that sentry check you were noot armed with catapults?

That looked like a terrific tour all you Meezers went on - makes us wish we were Meezers too!

Oh I laughed and laughed so hard when I saw this post... especially all the Meezers on the London Bus.

WOW Never seen so many meezers! Count me in for world domination!

That was great!!!! I LOVE the meezer bus! It looks like you had soooo much fun!

Donny and Marie and Casey said...

Thanks for da grand tour, Storm! It was a lot of fun on da Magic Meezer Tour. I always wanted to tour London...and to do that in style with all our Meezer furriends was da best!!!