Off With Their Heads!!!

I was inspired by Yao-Lin's blog post yesterday to look into Meezer origins a little more.

Well, I must say, I think we are getting the rough end of the stick these days! Us Siamese cats used to be highly prized possessions of royalty and priests no less, and one of our functions was to guard the temples and royal palaces of Siam. It was even an offense, punishable by DEATH no less if anyone stole a Meezer from a palace or temple. So...what does this mean for our Beans and Slaves then??? Much like the next Meezer, I want my Royal status reinstated, but not at the cost of Meowmie losing her head! However, we do need to make sure that our Beans know that we are much more than just carpet-lurkers and furry ornaments!

Unsurprisingly Siamese kittens were highly prized and giving one to a foreigner was considered the ultimate honor! Need I also add that SEAL point meezers (that's me and few certain other kitties I can think of) were the most highly prized?

I have also discovered that there is a rather worrying legend doing the rounds - we are supposed to descend from MONKEYS!!! Apparently many years ago (in a land that also had Unicorns no doubt!) a Samet Monkey fell in love with a Lioness. From this love came the Siamese cat - displaying the habits of the monkey and courage of a lion. This will explain why we stare you straight in the eye as we claw and scratch your furniture to pieces or hang from your curtains as we chew them to pieces right in FRONT OF YOUR EYES or sit atop your kitchen cupboards and howl at you when we want your attention or food! Here are some monkeys that my Meowmie met in India, can't see the resemblence myself though...can you? 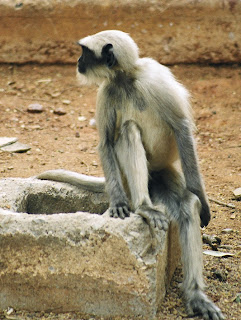 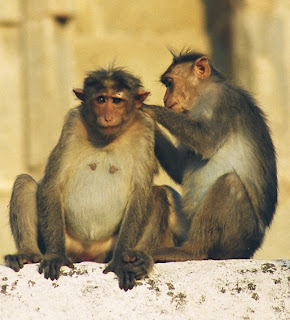 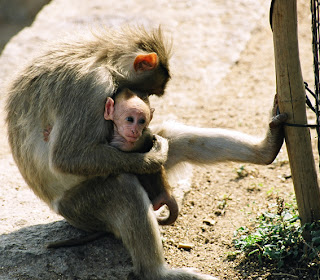 On a personal note - I had a tummy-sick-up free night last night! Woohoo! Unfortunately this was only my first sick-free night for a few days. Meowmie still hasn't dared try the Zantac again, but if I puke befoe she gets home then I think I will get given it tonight. Appetite wise - GIVE ME MORE! I am loving my food at the moment.

Some sad news too, Jane Tomlinson, a long-term cancer sufferer who defied all doctors predictions - she was given 6 months to live in 2000 - died yesterday. She was an amazing woman who dedicated the rest of her life to raising funds for charity by taking part in gruelling challenges, which even if you didn't have cancer you would find incredibly difficult to do, such as marathons and she cycled across the USA amongst other things, full story here. I hope everyone takes a second or two to think about how incredible this lady was. Bye Bye Jane, rest in peace now xxx 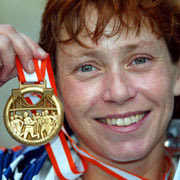 Concats on the award, Storm!
I wouldn't like our Mom to lose her head either. She takes good care of us, after all. But I'm not a Meezer, so I guess it wouldn't happen anyway.
Glad your tummy's feeling ok! Gree gets Pepcid AC when her tummy feels nasty from arguing with Mini (half a 10mg pill). So maybe the Zantac is good too, if it helps your tummy settle. We said a lil purr for Jane, she was a great fighter.
Oh and Mom said to email her about cafepress at catsnmom AT houseofthemostlyblackcats DOT com.
Purrrrrrs,
your bud Pepi and his silly sisfurs

I enjoy this article very much~!

And I am so sorry for the last news about Jane Tomlinson, too. Strong woman leave because disease always let us feel sad.
michico's mother died 14 years ago because cancer,too. Except we look up to Jane, we also need to protect and take care ourselves's healthy more~!

Storm, you are royalty in my eyes! But I do not think you are descended from monkeys.

I was sorry to read the sad news about Jane Tomlinson. She sounds like a very brave woman.

I don't think your Mom is in danger of losing her head. After all, she didn't take you from a temple or palace, did she? I can see how the legend of how Siamese are descended from lions and monkeys came to be. You are very brave and climb better than most ofter cats. Congratulations on a puke-free night. I hope you have a puke-free day, too. I am saddened to learn that Jane Tomlinson finally lost her fight. She was a great lady and a fine example to everyone.

That is some very neat information. I am sad to hear about the Jane lady. It's too bad that she isn't here anymore.

We don't think you resemble monkeys, very much... At all. We're so glad for your sick free night! Whoo hoo! Yay!!! Go Stormie! Keep it up!

Sorry to hear about Jane. We send pawsitive thoughts about what a wondrous woman she was and how much she accomplished.

Mom calls Ninna "Monkey Eyes" sometimes but I don't think that means her mom was a monkey!

I'm glad you had another good night, Storm ...

Donny and Marie and Casey said...

I don't like the thought of being descended from monkeys, that's too close to actually being related to humans....but having my royal status reinstated - oh yes please!!!

My mom's Meezer, Whiskers, was a Seal Point, so naturally she thinks the Seal Points are very special. My dam was a Blue Point Sphynx, so I think Blue Points are lovely too. :)

I don't know what has happened since the days of the Egyptians when we were worshipped, but at least our humans give us lots of love and attention.

I was so sad to hear about Jane Tomlinson as well, what an amazing lady. Her family must be devastated. Glad you had a sicko free nighto though. FAZ

We hope you have a very very goood day today Storm!

We have an awardie for you come see on our bloggie!!

Yay for a ralph-free night. We hope your tummy continues to feel better. And Yay for eating!!!

We're sorry to hear about Jane. She sounds like a really brave woman.

We hope you are feeling better. My Mommy had tummy troubles after her cancer treatment. She said it was dur to a reflux disorder. Have your mother emial us for other medical advice that Mommy doesn't want the world to know.
Muffin grimes1024@msn.com

My mom was just lookin' on your store, and she likes ones of the designs but she was wonderin' if you could put it on a different shirt? If you wanna email me I'll tell you what I mean.

I'm glad you had a sick-free night, Storm! My momma loves seal points a lot, and Granny always had a seal point growing up. Momma said you guys don't look like monkeys anymore, but you still got the monkey smarts. I think you are very sensitive, too, though, to celebrate a courageous lady like Jane.
Your buddy, Jimmy Joe