Hello everyone on this awful Thursday - my Meowmie's football team, Chelsea, are in turmoil - their manager Jose Mouriniho has walked/been pushed out and now they have no decent manager! This means they are unlikely to have a good season now which means Meowmie will be a bit sweary at the weekends.

In other news, i continue to vomit every day or so, and only the once...but apart from that I am eating really well and I am very much normal and 'myself'.

Now, my thirteen for Thursday is for Meowmie cos I know she has been dreaming of holidays and visiting India again - but she can't at the moment cos she has to take care of me. All these pictures are taken in an ancient Hindu religious site called Hampi, in India, which meowmie loved! Hope you like them.

The kids in India work hard - this little girl was helping her father set up his herb stand at the local market before she went to school. It was 7am! 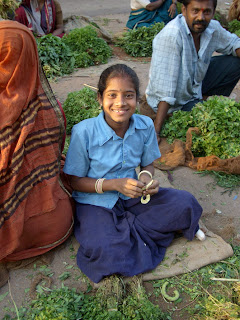 Be careful when you stop to put something in a bin - sometimes monkeys sit in them scavaging and you could get a nasty surprise! 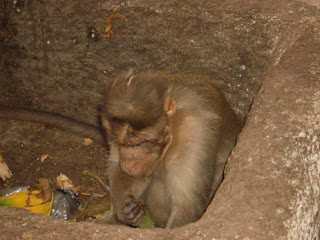 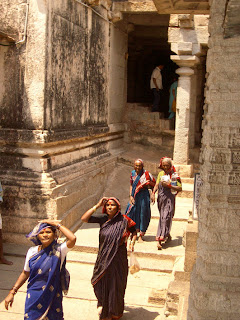 Another homeless Indian kitten - I reckon this one has got a belly full of worms! Meowmy said that it belonged with the other ones who had set up home under the shoe-stand, by the lovely restaurant mentioned in an earlier post, so it may just have been overfed! 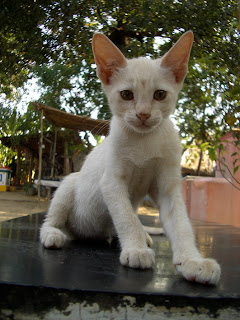 A troop of wild monkeys at Monkey Temple. Meowmy had a packet of biscuits in her bag and about 5 of them jumped on her and clambered up and down her body trying to find the food - they could smell it! Meowmie was very scared. 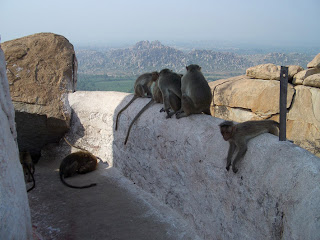 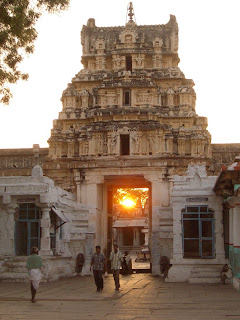 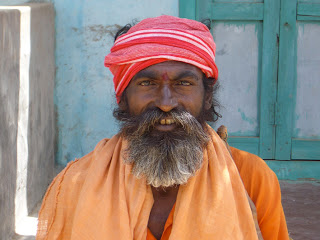 A frequent dinner companion! This fly is licking a grain of sugar. 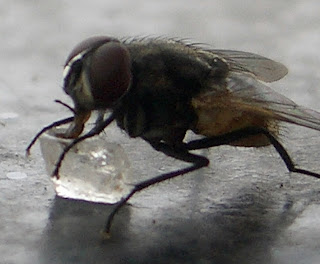 These were stables...for the king's elephants! 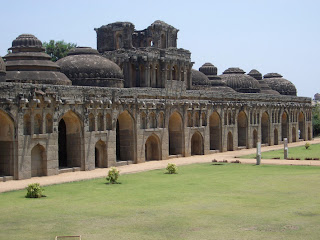 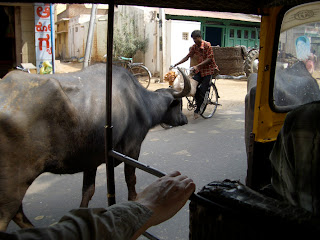 This snake was waiting for Meowmie outside an Indian toilet (basically a hole in the ground in a hut). Meowmie bent down and started taking pictures, just after she took this one the snake flared it's neck...it was a COBRA!!! An Indian man ran up to my Meowmie screaming for her to move away. I am glad she did! If you bigify and look carefully you can just see the neck starting to flare out. 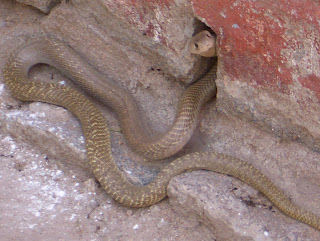 These temples is musical! Each column plays a musical note when tapped - Meowmie said it was truly beautiful. In the Olden Days a person would stand by each column and form an orchestra and play for the King! 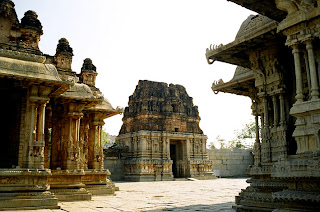 Meowmie took a picture of this little boy and his parents, they were pilgrims visitng the Hindu shrines - they were wearing their best clothes specially. This was the first time the young boy had ever had a photo taken - hence his look of bewilderment. 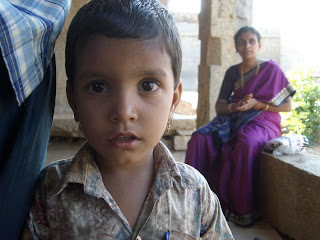 India looks amazing! Meowmy wishes she could visit interesting places but she can only look from afar for now.

Wowie, Stormie -- those are such great pickshures, thankies fur sharin' 'em. Momma and Daddy are both fascinated by India and they would really love to travel there sumeday.

Kittyhugs and purrs to you, my furriend!

Storm, those are some really amazing and beautiful photos your mom took. Your mom sounds very brave and adventurous. I would SCREAM if I saw that cobra, or the monkey.

You Mom took great pictures in India. I'm glad she noticed the snake was a cobra in time. I am sorry you are still having sick-ups, but glad that you are feeling good and eating well.

It's a beautiful place but has toooo many scary creatures for me.

India's great temple just like being in Angkor~! That is amazing~!!!

Thank you for introducing India for me, that is the place That I want to go, seeing those little girl helps her father I am so admire her. We are really live very well.

I love India! The religious sites are awesome! I lived there for a few months before going to uni and it was great! When did you go? Any more pics? (but not of the icky reptiles!)

Those are wonderful photos! India looks amazing. How scary about the snake! The musical temple sounds incredible. :)

You've inspired me to find some of my India pics to post! (will require searching through piles of pics at mum's house!). I've never been to where you've been - mainly up north: the Punjab, Delhi, Jammu and Kashmir and Dalhousie (which was beautiful!). Bombay is next on our list, too! Too bad we'll have to leave the boys at home! They'd love it!

What fascinating travels. The Human male would like to go to India.

happy birthday/fantastic blog you have here , great pictures/i love your sense of adventure, dont ever lose it....and much luck and happiness in school this year...

Thank you so much for sharing these wonderful pictures!!! That cobra SCARED us - even if it was just a picture!
Storm, I gave you the Nice Matters Award, because even with being sick and vomiting and all, you are always such a nice cat! You can pick it up at my blog.
Your friend Karl

wowww that looks stunning. The musical columns - how beautiful! Gorgeous pictures although the monkeys look a bit scary and the cobra? Well, that made us shudder!!

Those pictures are amazing, Storm! Thanks for sharing these images.

Hugs to you,
Lux

Thats so cool, your meowmie has gones to such interestings places. She needs to go to Eeegipt next, caused we hear they worships kitties there!