Our visit to see Ben Vet on Tuesday went well - Castle cried like a baby again, neighbours were alarmed again, Stormie's Limousine driver was alarmed again. Castle's toof-holes are healing nicely and he has lost more weight and is down to 5.5kg from 5.95kg! I weighed 100 grams heavier (3.24kg) but Ben Vet said I felt a bit 'bunged-up' so Ben Vet gave me an enema!!! SCREAM! He wanted Meowmie to do it at home but she was too nervous, Ben Vet pointed out that I might 'explode' in the Prisoner Transport Unit (PTU) and that she should bear in mind that I was sharing it with Castle...Meowmie said she would risk it (poor Castle)...luckily I held on til we got home, then the floodgates opened...I reckon I lost 100 grams ATLEAST after that episode! I had been sick after each meal on Monday and Ben Vet reckons my bunged-up-ness was the cause, apparently constipation triggers vomitting in cats - I finks he might be right cos I haven't been sick since my enema :)

Last night (Wednesday) well...what a night we have had! Just before Meowmie went to sleep last night she noticed that Castle seemed a little restless, she thought he was just in the mood for Stampeding Elephats so went to bed. AT 2.30am Castle seemed quite distressed - running to and fro, licking his paws, belly, tail, sides and scratching his ears. This went on ALL night, none of us slept, and by 5.30am Meowmie was alarmed cos Castle felt quite hot to touch and his ears were red and so was his skin. Meowmie took Castle straight to the vet this morning at 7.45am and the vet reckons Castle has had some sort of allergic reaction to something - Meowmie is at a loss to figure out what cos nothing has changed i.e. food, washing powders etc. So, Castle had an anti-histamine injection this morning and they took a blood test from him too...he is now at home wiv me resting up...the blood results have shown nothing abnormal and the type of reaction he has had makes the vet suspect he may have somehow got bitten by an insect that has flown into the house. Weez not so sure...so Meowmie will now do an audit of the house to try and see if she can work out what has gone wrong!

Have I got room for a Thursday Thirteen? I fink so...let's finish on something a little fun to distract myself from worry.

Thirteen Universal Truths
1) Triangular sandwiches taste better than square ones.
2) At the end of every party there is always a girl crying.
3) You're never quite sure whether it's against the law or not to have a fire in your back garden.
4) Nobody ever dares make cup-a-soup in a bowl.
5) You never know where to look when eating a banana.
6) You always feel a bit scared when stroking horses.
7) The smaller the monkey the more it looks like it would kill you at the first given opportunity.
8) Every bloke has at some stage while taking a pee, flushed half way through and then raced against the flush.
9) Driving through a tunnel makes you feel excited.
10) Old ladies can eat more than you think.
11) Despite constant warning, you have never met anybody who has had their arm broken by a swan.
12) You've turned into your dad the day you put aside a thin piece of wood specifically to stir paint with.
13) Knowledge is knowing a tomato is a fruit; Wisdom is not putting it in a fruit salad.

I can't fink of any relevant pictures today (enema? red-raw itchy skin? vomit? nah) so here is me as a fatty-boom-boom: 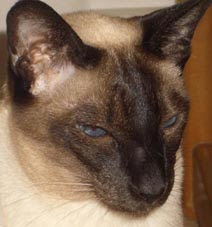 What excitement in your house! Poor Castle, that sounds terrible. I'm so glad he seems to be doing better, how scary.

Chase had an enema once while he was being boarded...he felt SO violated. He moped around for days afterwards.

I like your truths! Except the horse one, but I guess that's because the LL has a horse.

I hope you do better Storm. That doesn't sound like fun.

And poor Castle. Perhaps he just got himself worked up and had an allergic reaction to the vet?!

Oh, Storm. Enemas are not cool. I hope your tummy feels better after all that.

Poor Castle! You guys have just had a really rough week. I hope you both get some good naps in today.

An enema sounds fun. NOT!
Good grief, the indignity!

This TT is hilarious!!!

Happy day purrrs from us
<3

And Storm, I am very proud of you for holding it in until after you got home. You are very ladylike. I never had an enema before. I do not think I would like it very much. But I am glad that you are feeling better now.

My Lady laughed about the triangle sandwiches. She said that is so true!

haha those are excellent, especially the one about the swan! Despite this, my human still won't get too close to the swans when she goes to feed them! Wimp!

You look beautiful in that photo. I am glad the enema cleared you out, I hope Castle feels better soon. i wonder what the cause is? Could it have been something at the vets office itself that has caused it? Especially if nothing else has changed..hmm..hope castle is ok, please keep is posted xx

Storm, I love, love, loved strollering the first time I went. Tazo wasn't sure about it at first, but she likes it now, too.

Wowie, Stormie! You and Castle have had quite a time! I'm so sorry Castle had an allerjy reackshun. I hope he is feelin' bettur today. And I'm glad the v.e.t. fixed yur bung-up -- sumetimes Brainball has bung-up too cuz of alla his floof.

Yur thirteenie was kool! Both Momma and Daddy like triangular sandwitches.

Kittyhugs and purrs from MaoMao!

Sounds like a rough time for both you and Castle. Meowm and I will purray for everything to be okay.

That is a beautiful picture of you. *Much better than looking at vomit! ;-)

We're sending you & Castle all our best wishes - that must have been so scary about Castle's reaction to something!

Oh goodness, the two of you have had quite a few days!

Thanks for the purrs, I'm home now. The V-E-T didn't find the feather, so we are assuming it passed "naturally" and maybe something that was on it gave me an upset tummy. Kind of like Castle, no one is really sure what is wrong. But I came home with some yuccky medicine because of it!

Wow what a time you guys had! We are glad you are doing better Storm and that Castle is okay, too. Your T13 is great and we love your fatty-boom-boom picture!
Your FL furiends,

Those universal truths are something else! I didn't know half of them. Actually I didn't really know MOST of them......
Thank you for stopping by at Anastasia's blog! I know that when you ever cross the bridge she will be waiting for you and show you the best dirt rolling EVER! She was the MASTER of dirt rolling, she had at least a half dozen favorite rolling spots all around the house!

You have certainly been through a rough couple of days. I'm proud of you for holding it in until you got home after your enema, Storm. That doesn't sound like any fun at all. I hope Castle is feeling better after his allergic reaction to whatever it was. I love your TT and your picture.

Oh my! Poor you and poor Castle, Storm. That enema doesn't sound pleasant at all, but I'm glad it has helped you feel better. Poor Castle - how scary that he had that kind of allergic reaction! I'm glad he is doing better now.

That's a lovely photo of you Storm. :)

The last picutre doesn't seens happy~! I hope you are alright.

Gwad that your vet visit wented well. I do hope Castle's getting better.

Oh, poor Castle. But poor YOU!! An enema?! I've never had one, but it doesn't sound good.

"It never rains,it pours" comes to mind.You have had too much excitement. I must confess,I too have gotten bunged up and had to have several(3) enemas over the course of a day at the Vet :(
Now I must have a stool softener in my food. I know,too much info,heehee

Oh my goodness!!! What a week you two have had! Thank goodness you held on until you were home with the enema results!!! Wow. The limousine driver might have freaked a bit over that...

Those were very interesting tidbits of information for your Thursday Thirteen.

Sound like you guys had a rough couple days.

We gotta agree with 40 Paws -- if that enema had hit while you were in the limo, you and Meowmie might've wound up along the side of the road, trying to hitch a ride. At least you would have rode the rest of the way with all the windows open.

Wow! You had a very busy week! I hope you're both feeling better now.

Your new whiskers are beautiful just because they're coming back!!