To get us the mood for Halloween I am going to tell you about thirteen ghosts that live within half a mile of me!

My Meowmie and me lives in one of the oldest parts of London, the very centre of our Capital City so unsurprisngly there is a very high density of weird things here!

The Cock Lane Ghost
20 Cock Lane - No longer standing, this building was plagued by an outbreak of internationally famous poltergeist activity that centred itself around a young child in the household, Elizabeth Parsons and a ghost called 'Scratching Fanny'. 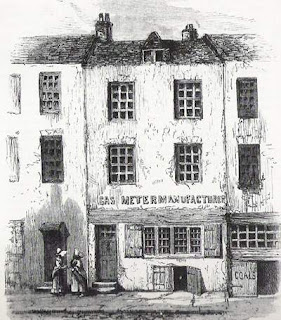 Burning Martyrs
Smithfield - The location where a total of 277 Protestants were once burnt alive for their beliefs, some have reported hearing their cries and screams late at night. Less fortunate people have also reported the smell of burning flesh.

Headless Duke
Charterhouse - A couple of ghosts are said to exist here. The Duke of Norfolk, who spent much of his time and money here, lost his head after upsetting Queen Elizabeth and now ascends the staircase of the great hall. Outside the buildings, a monk has been seen flitting between the courtyards of Washhouse and Masters.

Anne Naylor
Farringdon Tube Station - The odd screams that have been heard in this area are attributed to Naylor, thirteen year old girl who was murdered on this site in the mid eighteenth century. She is now referred to as 'the Screaming Spectre'.

Black-Winged Creature
Old Chambers, Lincoln's Inn - Charles Appleby was found dead in his room here, large claw marks on his arms and neck, the door and windows locked from the inside. Witnesses outside the building who could see into his room through a window said they could see the man fighting a shadowy bird like creature, though it was at least the same size as Appleby. Reports of the creature continued for a while afterwards, and one team of investigators who put down chalk dust during their stakeout recording finding large claw marks in the powder the following day

Victorian Lady
House of Detention - The apparition of a lady in a Victorian dress has been reported walking in the area of the building (what is left of it), while phantom footsteps and the soft crying of a lost child have also been reported

Horned Figure
Smithfield Meat Market - This phantom figure was said to have danced over meat stalls while angry butchers and meat merchants tried to stab at it, striking only thin air. 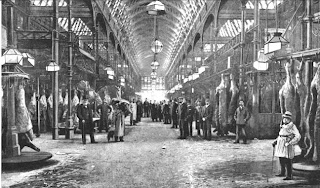 Rahere
St Batholomew's Church - This pious monk, who doubled as a jester in Henry I's court, is thought to be the man who built the church, and has been reported standing by the alter. He quickly disappears if seen. 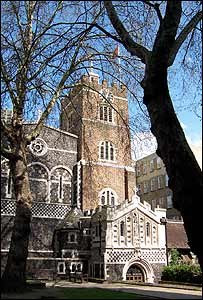 Figure in Photo
St Botolph's Church - An old Victorian lady, appearing in a photograph taken by Mr Chris Brackley, the image bore up to intense scrutiny. Mr Brackley was later contacted by a builder who recognised the face as one that he had seen in a coffin in the church. Ise found the photo too! The first one is the complete photo, take a look at the balcony to the top right of the image, there is a lady in old fashioned clothes standing there! The second picture is a zoom-in and shows the old lady better! 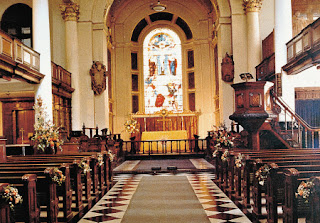 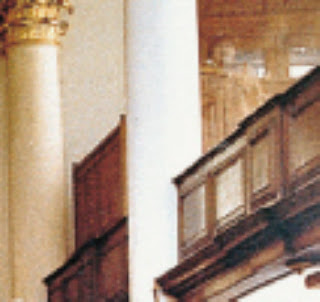 Red Haired Man
Sutton Arms Pub - This smiling entity materialises only for a couple of seconds at a time, before vanishing as quickly as he appears.

Grimaldi The Clown
Sadler's Wells Theatre - Once seen sitting in one of the boxes (which no longer exist), Jo Grimaldi is still seen wearing his clown makeup, almost 200 years since his death. 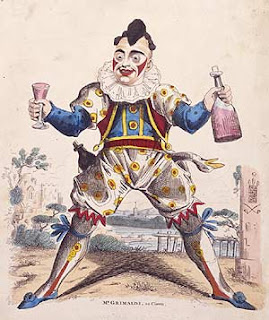 Dick O'Shea
Ye Old Red Cow Pub - Shortly after his death, the former landlord O'Shea would be seen sitting in the upper part of the public house, looking down at the drinkers below. His visits lasted only a year before he departed forever.

Hospital Visitor
Private home in Red Lion Square - A female guest at her friend's small flat was woken by another girl who wanted to know why her bed was occupied. The guest apologised and explained that she was invited, after which the girl left the room and the guest fell back asleep. The following morning she mentioned the incident to her friend - he paled and explained his flatmate who normally slept there was in hospital after a suicide attempt. They later discovered the girl had died during the night.

I should have listed the old Newgate Prison and Gallows, the site of that is close to our home too - but that site has SO MANY ghosts I don't fink there is enough room on the Internets to list them all!!!

I hope I have gotten you in the mood for Halloween! My Meowmie says that a lot of pubs have ghosts for some strange reason...she said that these ghosts tend to be wobbly and are only seen very late at night. I don't think I will go to any pubs - I really don't understand why Beans like going to pubs so much. Weird!!!

Wow, there are a lot of ghosts near where you live! Some of those stories are very spooky. I'm with you, Storm, I don't understand the appeal of pubs. My humans might disagree with you, though.

(shudders & looks around nervously) Uh...if anyone wants me, I'll be in the corner of the closet.

That was fun! My humans are always fascinated with ghostly things and old buildings in general. I will have to show this to the Chip Man!

I think we were at Smithfield. Of course. You did mention the Tower--is that farther away? I'm trying to remember my newfound London knowledge!

I'm so glad my humans went to London were it was so convenient for me to hang out with you! I had no idea you were in London in London!

Wow! Spooky! I think I shall not visit any pubs at all....they sound scawy!

I am scared of ghosts. I worry they are mean and they might try to hurt me. I am glad that I do not have any ghosts in my house. I would have to move if any were to ever show up.

oooh how fascinating!!! You know, the human would LOVE to do a ghost walk around London - the Isle of Wight is well known for being a ghosty place - maybe you should come over and we can do a ghost walk here! x

Oh Storm! How fitting for the halloween mood to tell of ghosties! I don't mind them at all....but clowns freak me out!!
I purrrray that you are doing well my brave friend. I have a date today for a garden stroll with a dashing gent!! I am one happy old girlcat.
Purrrrs Miss Peach

Ooooh, I'm definitely in the mood for Halloween now!

I love a good ghost story, and those were especially interesting! I could *see that ghost in the church!

Oh no!! You two must be very brave to protect your mommie from those scary ghosts! Oh wowie, we could see the ghost in the church. How nice that he lives there!

clown ghosts... clowns are freakie just on their own!

Wowie, those are all skeery soundin' ghosties! And you deffinitely got us Ballicai inna mood fur Halloween.

We hope you and Castle are doin' well today, and that yur foodies are treatin' you good.

Kittyhugs and purrs from your furriend MaoMao!

How fun to learn all about the spooky things around your house! Do you get scared??

I love walking on my lead, and often put on cute outfits to go for walks through our cul-de-sac. You can find lots of posts on that in my archives.

You picked some great ghosts to tell us about. It sounds very spooky around where you live. It definitely put me in a Halloween mood.

That would be way too many ghosts for me!!! It seems that there are quiet a lot of ghost in the UK? More like anywhere else? I've never seen a ghost out here...
But the maid saw one once!!!! In New Orleans, her friend saw it too. They told me it was very interesting.... No, thank you! Not for this cat!

Thank you for putting up the link to my limerick for you. I appreciate it.

That's very spooky. I am just a little bit scairt, but in a good way. I think I might have seen a lizard ghost one time.

We have an awaardie for you on our bloggie
come see!!

Those are creepy stories! Just the thing to get us in the mood for halloween!

Oh! This was very creepy and scary to read. Oh!